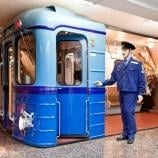 On November 2, the St. Petersburg Metro Museum will reopen its doors after a massive reconstruction.

Thanks to the work done, the museum has become a modern interactive and educational center where you can not only look at the exhibits, but also learn more about the work of the metro. The first hall is stylized as the lobby of the 1960s metro: turnstiles and ticket offices were installed here, as well as special sound effects.

In addition, a cinema-lecture hall with interactive zones appeared in the museum, as well as a model in the form of four cars of the 1960s, which clearly demonstrate the trajectory of the original composition. They ride through an improvised tunnel, drive up to indoor and outdoor stations, and at the end of the day leave for the park. Also, guests will be waiting for cars of different times.

At first, the museum can be visited only by appointment.