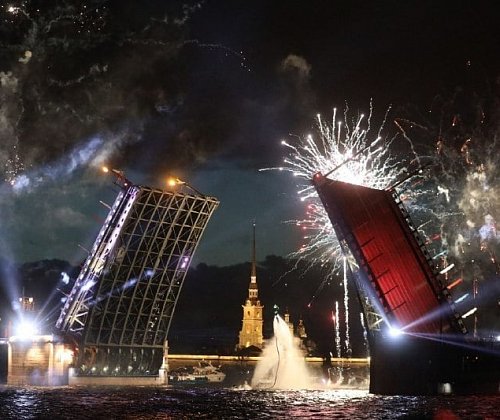 The show "Singing Bridges" completed the Sunday part of the celebration of the 316th anniversary of St. Petersburg. The program began with a concert of the Music Hall Theater Symphony Orchestra “Northern Symphony” under the direction of maestro Fabio Mastrangelo.

Around midnight, under the "Anthem to the Great City," the Palace Bridge was lit. Its raised wings became screens for a multimedia show. At the same time on the Neva, miracles of acrobatics were shown by hydro-flyers.

And at the end of the program, fireworks thundered from the walls of the Peter and Paul Fortress. And all the while the Singing Bridges show was on, torches burned on the Rostral Colons.

City Day celebrations will continue on May 27. At 10 am, the laying of flowers at the monument to Peter I on Senate Square will begin. A ceremony and rally will be held in the Peter and Paul Fortress, at noon a midday shot will be heard in honor of the 316th anniversary of St. Petersburg. In the evening, Petersburgers and city guests will enjoy a festive concert in the Great Concert Hall "October".