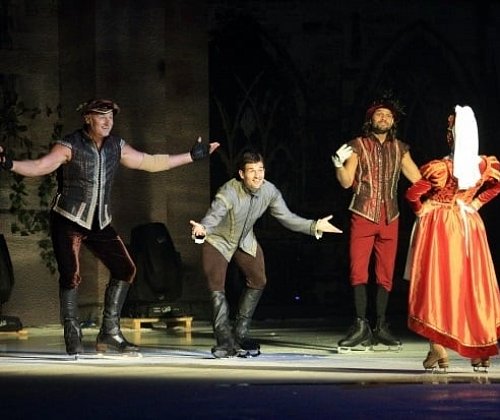 The second season of the grandiose ice show "Romeo and Juliet" starts June 6 in St. Petersburg. The Olympic lineup, live music and vocals, fencing, acrobatics, fire, water and a disarming finale, when all the skaters go out onto the ice ... barefoot. Ilya Averbukh made a show with Shakespearean scope. No wonder it was Romeo and Juliet that became the most visited and highest-grossing of domestic ice shows. In just 1 year, more than a million people watched it. This is a real dramatic performance on ice: figure skating champions not only perform the most difficult tricks, but also convey all the emotions of their heroes. For example, Alexey Tikhonov revealed brilliant acting abilities, independently voicing the role of Lorenzo's father.

The performance “Romeo and Juliet” was first shown in Sochi in July 2017 and in less than a year it became the most successful Russian ice show in history. Six Olympic champions were immediately involved in the play: Tatyana Totmyanina and Maxim Marinin (Romeo and Juliet), Alexei Yagudin and Roman Kostomarov (Mercuzzio and Tybalt), Tatyana Volosozhar and Maxim Trankov (prince and princess of Verona). The project involves 22 international-class athletes, more than forty ice ballet dancers, vocalists, musicians and dancers. Skaters were trained by professionals in fencing, acting and choreographers. Luxurious costumes in the style of medieval Italy were created by costume designer Konstantin Salavatov - in total more than 160 costumes were sewn. The creative and technical group of the performance employs more than 150 people.

Installation of the scenery of the play (with a total weight of 4 tons) takes 4 days. This is a whole small Italian town with houses, towers and, of course, Juliet's balcony.

The performance begins with the “end”, with the ending of Shakespeare’s drama. Monk Lorenzo (Alexei Tikhonov), tormented by guilt for the death of lovers, decides to write down their story for posterity. A new Plague character was introduced, the image of which was born from the famous aphorism "Plague on both your houses." The world champion Oksana Domnina embodied this image on skates, and the famous vocalist Ruslan Ivakin voiced the role of the Plague in the unusual technique of throat singing using the Khakass national instrument Khobra.

No spectator leaves the performance indifferent. Ilya Averbukh masterly affects all senses: light, sound, action - everything is brought to perfection. The duel on the swords between Romeo and Tybalt takes place under heavy rain amid the flashes of fire. The scene "Heat" makes goose bumps of all the fair sex - naked to the waist, athletically built skaters cause a flurry of applause in women. And even men cannot hold back their tears, seeing how Juliet (Tatyana Totmyanina) dies. As Alexei Yagudin said: “I’m a rather cynical person in my life, but believe me that I’m watching some episodes with Tatyana at the fifth, tenth or seventieth show, and I understand that a man can cry.”

No less impressive than the performance itself is the last minutes when all the skaters go out on the ice ... barefoot. The director himself comments on this unusual ending: “We are without skates, we take a step towards overcoming, because here we cannot lie, we cannot but believe that we are just cold like human beings.” In bare feet - the nakedness of the soul and hearts of artists and Ilya Averbukh himself.