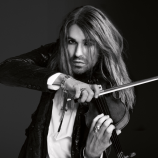 On September 9, a concert of one of the best violinists in the world, David Garrett, will be held at the Ice Palace.

David Garrett wrote his name in the history of world music with a bright and bold stroke. “The fastest violin virtuoso,” according to the Guinness Book of Records, amazes listeners with the versatility of its repertoire. With equal ease, he is given both the best and most complex works of Bach, and the grunge hits of Kurt Cobain. A huge talent, coupled with devilish charm, brought David a sea of ​​fans around the world.

In addition to his musical career, David Garrett starred in Bernard Rose's film Paganini: The Devil's Violinist. It would be difficult to find someone more suitable - today David is the only young violinist to whom the legendary Stradivarius violin has been entrusted.