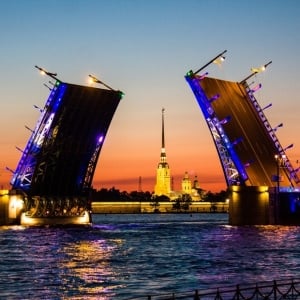 Cultural and educational project, implemented from 2016. Music starts a few seconds before the beginning of the layout of the Palace bridge, creating a public emotional tension and suspense before the action.

The musical content of the show is a compilation of the masterpieces by Russian and Soviet composers and lasts 25-30 minutes. In the first season we developed 4 playlist, including classical symphonic works by Russian composers. It is worth noting that all the playlists end with "Hymn to the Great city" by Reingold Glier.

The project presents creativity of St. Petersburg and Leningrad composers who have become symbols of the era, country and city. So, in the first and in the second season of "Singing bridges" weeks of music by Andrei Petrov, dedicated to the composer's birthday – September 2nd.

In the poster of the second season were added to the brilliant music of Russian composer Oleg Karavaychuka dedicated to the Day of remembrance of the composer.

In the second season of the show in honor of the 110th anniversary of the composer Vasily Solovyov-Sedoy in the week sounded a themed playlist of his works. In the night from 8 to 9 August, 25 minutes sounded the famous Leningrad Symphony, opening the program of festive events dedicated to the 75th anniversary of the Leningrad premiere of the Symphony No. 7 by Dmitri Shostakovich. Also in the season of 2017 was a musical compilation dedicated to the Navy Day and the feast of the Russian vest

In the season of 2018 "Singing bridges" will continue the tradition of themed playlists, and the audience for unusual programs, and interactives.