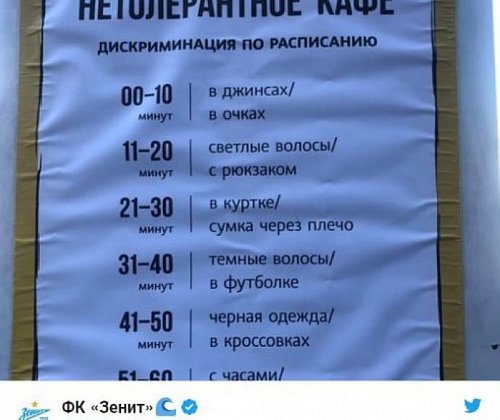 Unusual action football club "Zenit" held in conjunction with the charitable organization "Nochlezhka" before the match with "Anji".

The official blog of "Zenith" on Twitter appeared an unusual photograph, which presents the timetable of the "Intolerant cafe" where every 10 minutes the promised discrimination on certain grounds.

For example, from 11 to 20 minutes are allowed to be intolerant of people with blond hair and with a backpack.

Representatives of the "rooming house" explained that the action they are trying to draw attention to the problem of discrimination and show that it is foolish to deny people for formal reasons.
Source: https://peterburg2.ru/news/zenit-pered-matchem-s-anzhi-otkryl-kafe-gde-diskriminiruyut-posetiteley-4...