In St. Petersburg will host a championship parade "Zenit" 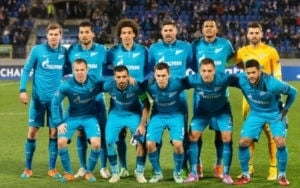 Petersburg football club had secured the gold, although the championship of Russia have not yet come to an end. "Zenith" for the fifth time received the title of Champions, the last time this title FC have achieved in 2015.

In honor of the victory, on the eve of the city Day, may 26, will host a championship parade. To celebrate the victory with your favourite club after the final round of the Russian championship game "Zenith" with "Yenisei".

The title of Champions of the St. Petersburg team has won after the game "Locomotive", 4 may. Most of the youth players of blue-white-blue won gold medals RPL for the first time in his career.

In Pulkovo players "Zenith" were met by happy fans, and Lakhta Center first lit brand the lighting in the club colors in honor of the victory blue-white-blue.