Participate in the pillow fight 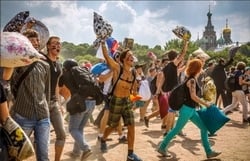 On 17 June the two armies will join in battle to find out whose pillow tight. The annual attraction "pillow fight" will be held in St. Petersburg on the square in front of the Theatre.

Grab a friend who wanted to reason with the friend who bought the same dress as you, and come to "Battle pillows". All who are born in even-numbered date will go into the army to the White God. The rest will fight under the banner of the Black God. Under drayvovy music of two armies come to battle. May the best man win.