Summer cinema in the garden of the fountain house 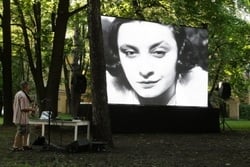 In the garden of the fountain house will open summer cinema. Every weekend from 3 to 17 June you can watch the masterpieces of world cinema under a canopy of old trees.

Come see elite films in the garden, where we walked Anna Akhmatova. In the yard of the fountain house will feature paintings that are impossible to see on the big screen. At the festival "A-Cinema" will show silent movies with live music St. Petersburg musicians. World classics, documentaries, short films will delight you in June.

The festival will open with the screening of Soviet-Hungarian film "Stars and soldiers" directed by Miklos of ANCO. Then the baton will be picked up sensual Czech film "Ecstasy" by Gustav, Mahat.