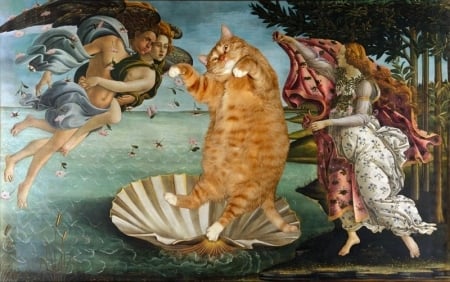 Who would not say that, and one of the best phenomena of the world network is, of course, seals. Not so long ago huge collection of all kinds of art about furry friends added another project, immediately won the hearts of millions of people around the world - "FatCatArt". To see the work, dedicated to the most popular Internet cat Zarathustra, will be from 14 November to 18 December at the exhibition "Kote in Sade".

Zarathustra - Petersburg fat ginger cat, which, thanks to the imagination of his owner, Svetlana Petrova, harmoniously blended with the paintings of Leonardo da Vinci, Diego velázquez, Rembrandt, Victor Vasnetsov, Ivan Shishkin and Sandro Botticelli. Work Svetlana has immediately gained popularity and even appeared in the stories the BBC and in the pages of publications such as "Spiegel", "Daily Mail" and others.

The exhibition in the Garden Benois St. Petersburg will be able to see those works that caught the fancy of people from all over the world, and enjoy the immortal works of art with a little a chubby ginger Supplement.