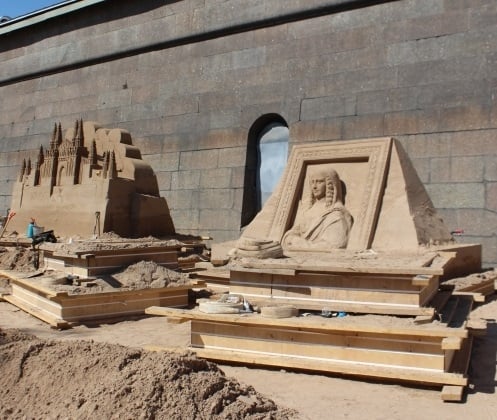 2018 is the year of bright and unforgettable events in the life of our city. In this regard, the organizers of the task was not only to surprise our guests with subtlety and craftsmanship sandy masterpieces, but also to choose a particular theme for the sand sculpture Festival in 2018, which will correspond to the high status of St. Petersburg as the cultural capital of the football world Cup! It was therefore decided to carve out of the sand, the brightest of world masterpieces masterpieces of architecture, sculpture and painting monuments included in the list of sites protected by the world organization UNESCO.

Sand sculpture festival - 2018 "World masterpieces" will provide a chance to the guests and residents of St. Petersburg to admire the cultural heritage of different countries gathered together in the heart of our city.

The list of songs presented at the festival included such world heritage sites as carved Duomo, the mysterious pyramid of the Maya, amazes with the sizes of the Colossus of Rhodes, the mysterious Egyptian Sphinx and statues of Ramses II, became a symbol of Egypt along with the pyramids. While the Central and the highest composition of sand sculpture Festival 2018 will be the Church of the Transfiguration with the world famous Kizhi island in Karelia, assembled without a single nail. I want to add also that this sculpture will be a record high for all years of the festival of sand sculptures in St. Petersburg and will be TEN meters height! This choice was made by the organizers to emphasize the antiquity and immortality of the great creations of human hands, at that time, as their sandy copies are short-lived.

Every year the technology of making sand sculpture becomes more complex and interesting. This year is the first sculptors will present a three-dimensional version of the most famous paintings in the form of complex panoramic compositions. This interpretation of the paintings has been created on any of such festivals in the world! Sculptors will show the audience his vision of the masterpiece painted by Leonardo da Vinci, Michelangelo, Ilya Repin, Alphonse Mucha. One of the most striking exhibits reflecting this creative idea of the festival, will be the Salvador Dali's painting "the Persistence of memory", also known as "Soft watches", in this case, made entirely of sand - fragile and fragile material, dissolving in the endless river of time.

However, if short-lived sand sculptures? This year the sand sculpture Festival in the Peter and Paul fortress will last for three and a half months. Long-term experience of the festival allows the organizers to create compositions based on the whims of Petersburg weather and for a long time. So there is no doubt that they will retain their original appearance until the end of the festival in mid-September.