The festival of art of animation: from classic to contemporary 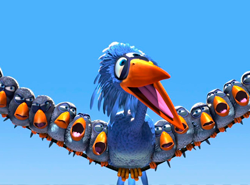 28 March in the Central library named after Lermontov starts the festival of author's animation. Visitors will see Soviet and modern cartoons, many of which have become classics.

Work, familiar to children and adults, will show on the first day. It's an old cartoon, "there once was a dog", "Fell last year's snow", "Ikar and wise men" and "film, Film, film".

The second day of the festival will dedicate a spy theme. Spectators waiting for the parody of gangster movies, ironic detectives and modern interpretation of the tale of Bluebeard. March 30, guests will be acquainted with the best foreign cartoons.

Will work taken with the known multipliers, and received awards at various competitions. A separate unit will show the cartoons well-known animator Harry Bardin. Among them, "Brack!", "Chucha", "Conflict" and "Before we were birds".