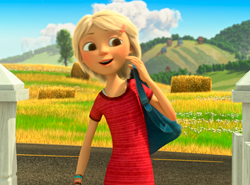 On April 20, the Russian cinema screens will be released the animated "Urfin jus and his wooden soldiers", based on the fairy tale by Alexander Volkov. Shortly before the premiere of the cartoon characters will travel to St. Petersburg, to arrange a holiday for children. Cartoon lovers are waiting for two unforgettable meetings.

The first will be held March 18 at the Park. Grandma (prospect Obukhovskoy Oborony, 149). With three colourful puppets, cartoon characters, children will participate in outdoor games and competitions outdoors. The second meeting will be held on March 19 at cinema Sinema Park "Grand Canyon" (St. Engels, 154). To win tickets to the premiere of a closed, post photos from the festival with the hashtag #URFIN. The authors of the coolest photo will be the first to see the cartoon.

In the end, surly, a carpenter named Urfin jus, who seized the emerald city with an army of wooden soldiers. His evil plans have to destroy a friend of the company — it is taken for the girl Dorothy, tin man, Scarecrow and the lion Brave. The main characters was voiced by Sergey Shnurov, Konstantin Khabensky and Dmitry Dyuzhev.